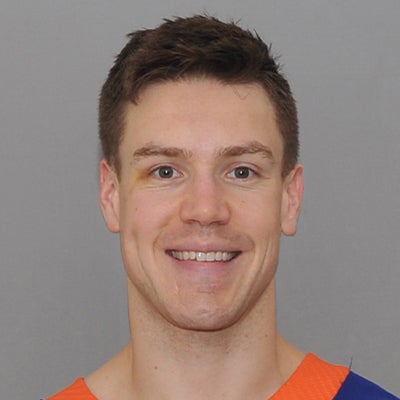 2019-20: Recorded two assists in 25 AHL games with the Sound Tigers and eight points (1g, 7a) in 18 ECHL games with the Worcester Railers... Began the season with one assist in six games while serving as Worcester's captain before he was recalled by Bridgeport on 10/29/19. 2018-19: Spent the majority of the season with Worcester (ECHL) and served as team captain for the first time in his pro career... Ranked sixth on the Railers in scoring and first among defensemen in assists (25) and points (30)... Ranked second on the Railers with a career-high 172 penalty minutes. 2017-18: Played mostly with Worcester and ranked second on the team in penalty minutes (127)... Co-led Worcester defensemen in points (24) and served as an alternate captain... Added 32 penalty minutes in 12 games with the Sound Tigers. 2016-17: His only professional campaign overseas was played with the Straubing Tigers of the DEL - Germany's top professional league... Collected nine assists and 117 penalty minutes in 49 regular-season games. 2015-16: Recorded an AHL career-high 132 penalty minutes with Charlotte in 2015-16... Made his AHL debut with Bridgeport on 11/13/15 at Springfield and notched two assists. College: Played four seasons at the University of Maine from 2009-13, including one year with goaltender Scott Darling... Served as team captain during his senior season at Maine.