It was one of Bridgeport's toughest weeks during its first-half schedule, as the Sound Tigers faced the Hartford Wolf Pack (15-15-2-2) and Springfield Thunderbirds (15-11-4-3) immediately following their four-day holiday hiatus. All three games came down to just one goal.

The club approaches the halfway mark of 2018-19 later this week, currently sitting second in the Atlantic Division, four points behind the league-leading Charlotte Checkers (51 points).

The Sound Tigers opened their post-holiday tripleheader with a 3-2 victory over Hartford at Webster Bank Arena on Thursday. Scott Eansor scored twice to push his goal-scoring streak to three games, while Kieffer Bellows added his eighth tally of the season and propelled Bridgeport to its league-best 12th win at home. Between the pipes, Jeremy Smith (11-5-1) made 23 saves in his third straight win. Bridgeport also extended its unbeaten in regulation streak at Webster Bank Arena to 15 games (12-0-2-1, team record).

On Saturday, the Sound Tigers converted on both of their power plays and Koivula broke a third-period deadlock with his eighth goal of the year in a 4-3 victory against Springfield at the MassMutual Center on Friday. Mitch Vande Sompel, Parker Wotherspoon and Mike Sislo (first goal since Nov. 11) also found the back of the cage, while Michael Dal Colle led all players with three assists prior to his second NHL call-up of the season on Saturday. Christopher Gibson (10-4-4) backstopped the effort with 29 saves one day after his 26th birthday as the Sound Tigers opened a six-game road trip.

Bridgeport moved a dozen games above .500 with its seventh win beyond regulation Saturday night, topping the Wolf Pack in overtime, 3-2, at the XL Center. Travis St. Denis scored with less than 34 seconds left to push the Sound Tigers to their third win in a row against Hartford. Bellows and Koivula also found the back of the cage, while Smith made 31 saves, including several timely stops in the third period.

Bridgeport ventures outside of the Atlantic Division this week and opens 2019 with a tour of New York State. The Sound Tigers face the top two teams in the North Division - the Rochester Americans (20-11-2-0) on Wednesday and the Syracuse Crunch (20-8-2-0) on Friday – followed by a matchup against the Binghamton Devils (15-19-3-0) on Saturday. Bridgeport is 3-1-1-0 against North Division opponents so far this season.

Fans can follow all of the action online via the Sound Tigers Radio Network and AHLTV, beginning with the pre-game show 15 minutes before each listed start time.

Wednesday, Jan. 2 at Rochester Americans (7:05 p.m.): The Sound Tigers look to ring in the new year with their fourth straight victory. Bridgeport will battle Rochester for the third time this season and the first of two meetings at Blue Cross Arena. The Amerks won the first two matchups at Webster Bank Arena in October, including a 3-2 overtime win on Oct. 14. Rochester forward Victor Oloffson led all players with four points (two goals, two assists) on the weekend, helping him win CCM/AHL Player of the Week honors.

Friday, Jan. 4 at Syracuse Crunch (7 p.m.): Bridgeport and Syracuse line up head-to-head for the first of two matchups this season, and their only tilt at the Oncenter War Memorial Arena. The Sound Tigers went 0-2-0-0 against the Crunch in 2016-17, including a 4-1 setback in Upstate New York on Mar. 23.

Saturday, Jan. 5 at Binghamton Devils (7:05 p.m.): The Sound Tigers face the Devils for the second and final time this season, and will attempt to sweep the two-game series. Bridgeport scored a season-high four power-play goals en route to a 7-3 victory at Webster Bank Arena on Nov. 7, in which Chris Bourque had three points (one goal, two assists) and Travis St. Denis scored a pair. The Sound Tigers suffered a loss in their only trip to Binghamton last season, 2-1 on Oct. 7, 2017.

St. Denis Comes In Clutch: Third-year forward Travis St. Denis pushed the Sound Tigers above .500 on the road for the first time this season when he scored the overtime winner at the 4:26 mark on Saturday. It was his team-leading second OT winner this season and his third game-winning goal overall, tied with Chris Bourque and Steve Bernier. In addition, it was St. Denis' fourth career overtime-winning goal for Bridgeport, which is second-most in team history. The Quinnipiac University product is tied for third on the Sound Tigers in goals this season (nine) and tied for sixth in points (19).

Koivula Keeps Collecting: New York Islanders' 2016 fourth-round pick Otto Koivula has showed no signs of slowing down in his first professional season in North America. The Nokia, Finland native chipped in his eighth and ninth goals of the season last week and is up to fifth on the team in scoring (21 points in 31 games). He is third on the team with seven multi-point games and the Sound Tigers are 7-1-0-0 when he scores a goal. Koivula, the Sound Tigers' youngest player at 20-years-old, also leads the team with a plus-14 rating and is fourth among all AHL rookies in that department. 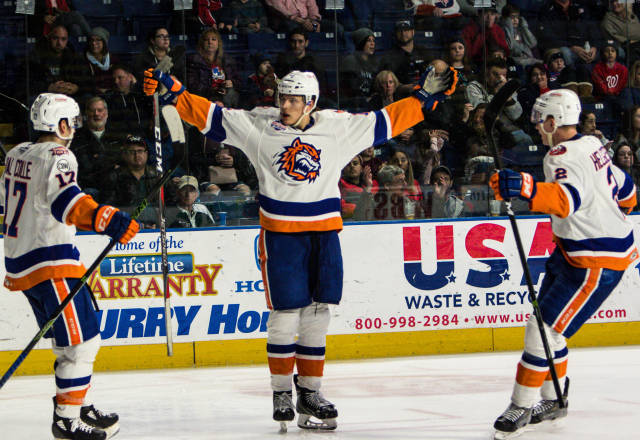 Start Me Up: The Sound Tigers struck first in all three games last week and have now recorded the opening goal in 11 of their last 12 outings. In fact, Bridgeport has scored first 22 times this season (tied for second-most in the AHL) and continues to be one of the league's strongest teams early in games. The club's 41 first-period goals are tied for second in the AHL and the Sound Tigers are currently 18-2-1-1 when scoring first.

Quick Hits: Jeremy Smith went 6-1-0 with a 2.12 goals-against-average during seven starts in December and is now 11th in the AHL with a 2.62 goals-against-average this season… Koivula is tied for 15th among league rookies with 21 points (nine goals, 12 assists)… Sebastian Aho is tied for fourth among AHL defensemen with 23 points (three goals, 20 assists)… Aho is third among blue-liners in assists… Steve Bernier is tied for third in the AHL with eight power-play goals and fourth in shooting percentage (27.9%)… Bridgeport is 14-0-0-0 when scoring at least four goals in a game… Michael Dal Colle notched his first NHL point with an assist in the Islanders' 4-0 win at Toronto on Saturday.

The New York Islanders (21-13-4) ended 2018 on a four-game winning streak, capped by Robin Lehner's 39-save effort against his former team in a 3-1 triumph over the Buffalo Sabres on Monday. Former Sound Tigers Brock Nelson (GWG) and Ryan Pulock accounted for two of the three goals and head coach Barry Trotz moved into fourth place on the all-time NHL wins list (783). The Islanders also earned victories against the Ottawa Senators and Toronto Maple Leafs last week, which featured a Mat Barzal hat trick against the Maple Leafs on Saturday. Barzal leads New York with 36 points (10 goals, 26 assists), while former Sound Tiger Anders Lee has a team-best 14 goals. The Islanders return to action this Thursday with a 7:30 p.m. matchup against the Chicago Blackhawks at NYCB Live (NBCSN).

The ECHL's Worcester Railers H.C. (13-14-3-2) completed 2018 with back-to-back losses and currently sit sixth in the North Division standings. Last time out, the Railers suffered a 3-1 setback to the Maine Mariners on Saturday, but former Sound Tiger Ryan MacKinnon had one assist and now boasts a five-game point streak entering 2019. Worcester opens a three-game, three-day road trip through the Palmetto State this Friday with a 7:05 p.m. matchup against the South Carolina Stingrays. The series shifts to Greenville on Saturday for a weekend doubleheader against the Swamp Rabbits.

Packed Promotional Lineup: The Sound Tigers will boast one of their most extensive and wide-ranging promotional schedules ever for the 2018-19 season. The fan-friendly calendar includes the return of popular themes like Military Appreciation (Jan. 12), Star Wars Night (Jan. 19), Princess Night (Mar. 30) and Hockey and Hops (Mar. 17), while regional hockey fans will be elated for the addition of Hockey Weekend in Connecticut (Feb. 23-24). View the full 2018-19 promotional schedule.

For additional details or to reserve a group outing for any giveaway or theme night, please call the Sound Tigers' front office at (203) 345-2300 ext 7.

About the Bridgeport Islanders

Founded in 2001, the Bridgeport Islanders Hockey Club is the top minor league affiliate of the New York Islanders. Don't miss your chance to take part in the family fun entertainment happening every home game at Webster Bank Arena. For further information on ticket or sponsorship opportunities, call our office at (203) 345-2300 or e-mail [email protected].